Ohio couple gets married surrounded by ghosts and witches 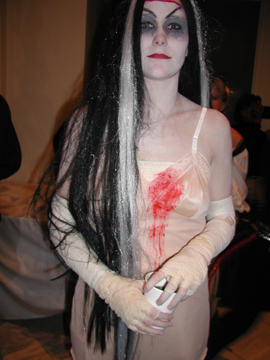 Ohio couple gets married surrounded by ghosts and witches

An Ohio couple got married in the haunted house where they work – watched by zombies and witches.

The groom made his entrance in a hearse, emerging from a coffin borne by six pallbearers.

"It's weird watching your son get out of a coffin," said his father, Robert Seifer II. "Usually when you see someone in a coffin, they're going the other way - in, not out."

The minister, clad as the Grim Reaper, read The Lord's Prayer from a scroll clutched in bony-gloved hand.

"This is the sweetest wedding that I've ever been to," said co-worker Tim Perrien, his face caked in makeup. His date, Jessica Repas, was dripping with blood as the lead character in the horror move "Carrie."