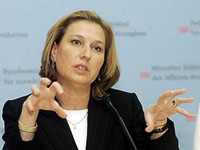 Israel’s foreign minister will arrive in China over the weekend to lobby for intensified U.N. sanctions against Tehran.

Tzipi Livni was due to arrive on Sunday and leave Tuesday after meeting with Premier Wen Jiabao and her Chinese counterpart Yang Jiechi, the embassy said in a brief statement.

The visit follows sweeping U.S. sanctions against Iran, imposed Thursday after attempts at a third set of United Nations sanctions was repeatedly held up by Chinese and Russian opposition.

During her visit, Livni will also sign an agreement with Yang to designate Israel as an official destination for China's burgeoning number of outbound tourists, the embassy said.

"The two sides will discuss the full array of bilateral and international issues of common concern, including the Iranian nuclear issue and the Middle East peace process," the statement said.

Washington has long labeled Iran a state supporter of terrorism and has been working for years to gain support for tougher sanctions from the international community aimed at keeping the country from developing nuclear weapons.

"To impose new sanctions on Iran at a time when international society and the Iranian authorities are working hard to find a solution to the Iranian nuclear issue can only complicate the issue," the ministry said in a brief statement faxed to The Associated Press.

Washington has already won two U.N. Security Council sanctions resolutions, but Yang and other Chinese officials have said that China, a veto-wielding permanent member of the council, would not support further sanctions from the body.

That is in part a reflection of Beijing's disdain for any measure it considers as interference in another country's internal affairs. However, China's need for export markets and energy resources have prompted it to draw close to Iran and Sudan, undermining attempts by the West to isolate those regimes over human rights and other issues.

Underscoring their close ties, Iran's interior minister said last month his country has finalized oil and gas projects with China and that two-way trade was on target to hit $20 billion (EUR14.4 billion).

Russian President Vladimir Putin described the American sanctions on Thursday as unproductive, while Israel, which Iranian President Mahmoud Ahmadinejad has said should be "wiped off the map," has welcomed the move.

The new U.S. sanctions are the most sweeping since 1979, when the takeover of the U.S. Embassy in Tehran ruptured diplomatic, business and military ties.

They will cut off more than 20 Iranian entities, including individuals and companies owned or controlled by the powerful Revolutionary Guard Corps, from the American financial system.

At a news conference earlier this month, Livni said she hoped the latest effort at U.N. sanctions would not be watered down.

"In the past, the need to get everybody on board, including Russia and China, has led to some compromises on the nature of sanctions. I hope this will not be the case this time," she said.

China and Israel have built up robust relations in the 15 years since they established diplomatic ties, with two-way trade expected to approach US$4 billion this year.

Israel has sold defense technology to China's military and its companies are helping provide security at next year's Beijing Olympic Games.

During her visit, Livni will also sign an agreement with Yang Jiechi under which Israel will be designated an official destination for China's burgeoning number of outbound tourists, the embassy said.

"The two sides will discuss the full array of bilateral and international issues of common concern, including the Iranian nuclear issue and the Middle East peace process," the embassy said in a brief statement.