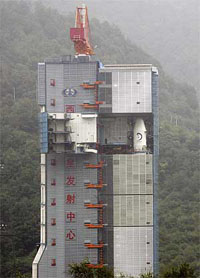 China is very proud of launching of its first lunar probe – and sometimes this pride turns out an embarrassment – a local newspaper placed a huge front page photo – of a Japanese rocket.

The error switched a photo of a Long March 3A rocket carrying the Chinese probe with an H-2A rocket that sent Japan's own lunar orbiter into space earlier this month, a deputy editor of the Jingzhou Evening News, who would only give his surname, Deng, admitted Friday.

Chinese readers are brought up on government propaganda emphasizing Japanese atrocities and usually respond strongly to any kind of perceived pro-Japanese slight.

Pictures of both rockets were issued by China's official Xinhua News Agency on Wednesday, the day of the Chinese launch, but the paper's photo editor had failed to read the captions carefully, Deng said.

"It was really irresponsible and we've already criticized and educated the editors involved and asked them to conduct a self-criticism at the next staff meeting," Deng said.

Such self-criticisms are deeply ingrained in China's communist political culture and are used by the entirely state-controlled media as an administrative punishment that allows the employee involved to still keep their job.

Reader response to the error wasn't immediately known, and Deng would not say how the error was discovered. However, he said that government propaganda bodies responsible for supervising and disciplining state media had yet to contact the paper over the mistake.