No referendum on missile defense to be held in Czech Republic 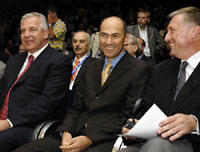 No referendum on missile defense to be held in Czech Republic

No nationwide referendum will be held in Czech Republic on the U.S. proposal to install radar at the country’s territory, according to the lower chamber of the Czech parliament.

The U.S. made a formal request in January to place a radar base near Prague as part of a defense shield that Washington says is needed to protect European allies against a potential threat from Iran.

The U.S. also wants to place 10 interceptor missiles in neighboring Poland as part of the system. The two former Soviet satellites are now NATO members.

The government of Czech Prime Minister Mirek Topolanek has voiced support for the radar base and has been negotiating with Washington on the plan. The opposition Social Democrats and Communists are against the proposal and demanded a referendum to allow voters to decide, which the government opposed.

If a deal with the U.S. is reached, the plan will go before the Czech Parliament for a vote.

The Czech Republic does not have legislation allowing for nationwide referendums, and any such ballots must be called for in special laws adopted by Parliament.

On Friday, of the 144 lawmakers present in the 200-seat chamber, 76 voted in favor of legislation allowing a referendum, well short of the necessary 120. Fifty-seven deputies rejected it and 11 abstained.

According to recent polls, most Czechs oppose the planned radar site.