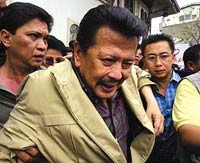 Ousted President Joseph Estrada was a free man Friday for the first time in 6 1/2 years after his successor pardoned his graft conviction.

A court order was issued allowing the 70-year-old former action film star to leave his villa east of Manila, where he has spent most of his time in detention since he was arrested after being forced out by the country's second "people power" revolt in January 2001.

He was convicted last month on graft charges and given a life sentence but was pardoned Thursday by President Gloria Macapagal Arroyo.