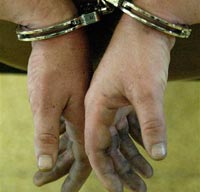 Bear paws are considered a delicacy in China, and are used in some traditional medicines.

"We found the paws on Oct. 14 in a regular road check," said an official from the Xin'an county police office in southwestern China's Guangxi Zhuang Autonomous Region. Like many Chinese bureaucrats, he refused to give his name.

"Two of the paws come from the rare Malayan sun bear. And the rest are all from black bears, which is also a protected species in China," he said.

The bear paws, with an estimated value of 320,000 yuan (US$42,700; EUR29,800), were discovered when two men, surnamed Chong and Ling, were stopped in a van trying to take them out of Guangxi, the local Guilin Evening News reported.