Astronauts aboard space shuttle Discovery and the international space station joined forces, linking their ships and kicking off the biggest construction job ever attempted by a single team in orbit. 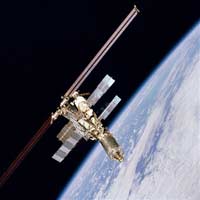 History was made Thursday with the 215-mile-high (345-kilometer-high) linkup: It was the first time two female commanders met in space.

Retired Air Force Col. Pamela Melroy steered Discovery in for the docking and was the first to enter the space station. She was embraced by Peggy Whitson, the station's skipper.

Right before the two spacecraft hooked up, Melroy guided Discovery through a 360-degree backflip so the station crew could photograph the entire shuttle. The pictures were hurriedly beamed down so NASA could determine whether Discovery's belly sustained any launch damage from ice or insulating foam from the fuel tank.

The small patch of ice that shook loose from fuel tank plumbing at the moment of liftoff Tuesday ended up grazing the fuel-feedline hatch on the bottom of the shuttle. John Shannon, chairman of the mission management team, likened it to an ice cube falling 10 inches (25 centimeters) and said the hatch was unharmed.

In fact, Shannon said most if not all of the shuttle's thermal shielding looks to be in good shape, including three wing panels that a safety engineering group urged to have replaced before the flight. Further analysis is needed before NASA can say definitively that Discovery suffered no significant launch damage. But unless something new pops up, engineers see no need for additional shuttle inspections.

When informed of this Thursday evening, Melroy exclaimed, "Oh man, that is fantastic news."

Earlier in the day, laughter and shouts of "How you doing?" filled the space station as the seven shuttle astronauts floated in one after the other and greeted the three station occupants.

A half-hour later, Anderson relinquished his space station position to Daniel Tani, who will spend the next two months there. "I have to send out my 'I have moved' card," Tani radioed to Mission Control.

"He's behind already one month in rent," said Anderson, who moved into the space station in June. Discovery will bring him home.

Astronauts woke up early Friday to an appropriate Elton John tune. Mission Control chose "Rocket Man," a reference to the first of a record-tying five spacewalks set for Friday.

Astronauts Scott Parazynski and Douglas Wheelock will be outside as a bus-sized compartment named Harmony is unloaded from Discovery's payload bay and attached to the space station by the station's robot arm.

Harmony, which was made in Italy, will serve as the docking port for the European and Japanese laboratories that will be delivered on the next three shuttle flights.

The two spacewalkers will remove a broken antenna from the station and pack it aboard Discovery for the ride back, and prepare a space station girder for relocation later in the flight.

Moving that girder will be like a ballet, Shannon said. "It's very tough," he said.

Given all the construction work on this mission, "We are extremely lucky that we have a vehicle that is in such incredible shape," Shannon said.

Melroy, 46, earned praise from Mission Control for her precise parking at the space station. She is only the second woman to command a shuttle.

Whitson, 47, a biochemist, is the first woman to command a space station.