Superior Court judge has released Britney Spears from paying hit-and-run charges after she compensated the damage to the other driver who took part in the accident. 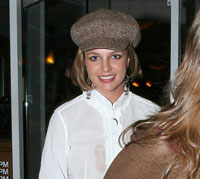 A charge of driving without a license was not dismissed and a pretrial hearing was scheduled for Nov. 26. Speer accepted a not guilty plea entered on Spears' behalf by lawyer Michael Flanagan to that charge.

Outside court, Flanagan said Assistant City Attorney Michael Amerian had offered Spears a plea deal involving the license charge that would have resulted in her being placed on probation for a year.

Flanagan said he believed a plea was unnecessary because Spears had rectified the situation by recently getting a California driver's license.

"She got a license, she has insurance, has always had insurance," he said. "The question is: Is probation really necessary?"

Flanagan said Spears previously had a license in Louisiana but did not have one in California because a camera was not available at the Department of Motor Vehicles when she went to apply for a license well before the accident.

Flanagan said he had not spoken to Spears in a few days.

He said the owner of the car that was hit was satisfied with the resolution and did not want to go forward with the hit-and-run charge.

Amerian also told the judge the owner of the other car was satisfied.

"I spoke with the victim," he said. "She indicated she had been fully compensated for her damages and is amenable to the civil compromise."

In the incident, paparazzi photographed Spears steering her car into another vehicle as she tried to park in a space in a lot. The video showed her walking away after assessing the damage to her own car.

On Friday, a hearing is set in Spears' custody fight with ex-husband Kevin Federline over their two young sons.

Her attorney, Anne Kiley, said earlier this week that Spears had regained temporary visitation rights of her sons, Preston, 2, and Jayden James, 1.

Superior Court Commissioner Scott Gordon had told Spears just days earlier that she could not visit the boys without a parenting coach present until she complies with a court order.

The mandate did not spell out what directives Spears failed to comply with.

Among other things, Gordon ordered her to undergo random weekly drug testing, citing evidence that Spears engaged in "habitual, frequent and continuous use of controlled substances and alcohol."