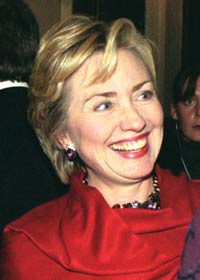 Comedian Billy Crystal and rockers Elvis Costello and the Wallflowers headlined the event Thursday night at New York's historic Beacon Theater, which raked in more than $1 million (EUR700,000) for Clinton's presidential bid in 2008.

Former President Bill Clinton and daughter Chelsea joined the New York senator onstage to thank supporters, who had donated as much as $2,300 (EUR1,600) apiece to attend. Hillary Clinton's mother, Dorothy Rodham, and brother, Tony Rodham, looked on from the audience.

Bill Clinton noted that his wife was "still looking, I think, very beautiful" at 60 and said she was in the presidential contest for the right reasons.

In her remarks, the former first lady noted the presence of Wallflowers lead singer Jakob Dylan, the son of rock legend Bob Dylan. She seemed to share his story as a metaphor for her own presidential effort - that no matter how much her family connections may have helped propel her candidacy, she ultimately will win or lose on her own.

The Wallflowers, she said, are "a wonderful bridge, because we knew it was a talented group that was making it on its own. But the fact that Jakob Dylan, for many of us, was a connection to his extraordinary father Bob Dylan, made it even sweeter."

It was the second major birthday fundraiser for Clinton's campaign this week. Movie director Rob Reiner threw a party for her at his Los Angeles home Sunday night, with several Hollywood celebrities on hand. Clinton's actual birthday is on Friday.

The campaign also has used her birthday as an organizing tool, posting a video message on her campaign Web site by the former president urging supporters to send birthday greetings.

It's a milestone birthday for the former first lady, who made her debut on the national stage in her husband's 1992 presidential race. Then, the Clintons were portrayed as a youthful power couple who would bring new energy and a generational shift to the White House - a message Democrat Barack Obama has tried to capture this time.

Clinton has joked publicly about her age in recent campaign appearances.

"I have been reminded by some of my friends that when you get to be my age having so many men pay attention to you is kind of flattering," Clinton said in Iowa this week, referring to her political rivals.