The memoirs of former British Prime Minister Tony Blair will finally see the light after a long bidding war. The book will be published by Random House Inc. in the UK. 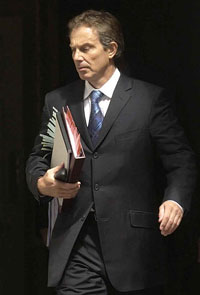 "I hope my memoirs will provide a serious and thoughtful, but also entertaining, reflection on my time as a member of Parliament and as prime minister," Blair said in a statement issued Thursday by publishers Hutchinson in England and Alfred A. Knopf in the United States.

"He has a remarkable story to tell," Knopf chairman Sonny Mehta said in a statement. "His tenure as prime minister was marked by close relationships with Presidents Clinton and George W. Bush, and he enjoys a profile in this country that is rare among foreign leaders."

Blair's book, which he will write himself, is currently untitled and is still "at least a couple of years away" from being published, according to his literary representative, Washington attorney Robert Barnett, who declined to discuss financial details.

"This has been one of the most lively and most competitive processes I've participated in in over 20 years of representing authors," Barnett, whose many clients include Bill Clinton and Sen. Hillary Rodham Clinton, told The Associated Press.

Blair has connections to Random House on both sides of the Atlantic Ocean. Bill Clinton's memoir, "My Life," was also published by Knopf and Hutchinson. In England, Random House Group chief executive Gail Rebuck is married to Lord Gould, a political strategist and senior adviser to Blair during his time in office.

Blair, 54, stepped down last June after a decade marked by historic peace in Northern Ireland and an unpopular war in Iraq. He was succeeded by Gordon Brown, who competed with Blair to lead the Labour Party in 1994 and then served as Treasury chief the past decade.

The success of prime ministers' memoirs in the United States usually depends on the fame of the author, with books by Margaret Thatcher and Sir Winston Churchill attracting far more attention than the autobiography of John Major.

Blair has been the subject of numerous books, notably the best seller "The Blair Years," by Alastair Campbell, his former press secretary. Blair himself has written " New Britain: My Vision of a Young Country," a collection of speeches and articles that came out in 1997.

A recent novel, Robert Harris' "The Ghost," is narrated by the ghostwriter of a former British prime minister, widely believed to be based on Blair. Upon entering a London publishing house, where he must pass through a metal detector, the narrator snaps: "Who're you expecting to bomb you? Random House?"