Ex-first lady Hillary Clinton likely to become US next president

The former first lady Hillary Clinton has all chances to win the 2008 presidential race. In setting her pre-election campaign she seems to beat all her rivals. 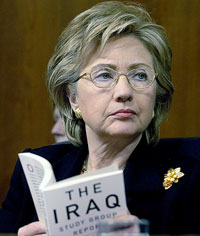 Ex-first lady Hillary Clinton likely to become US next president

She is so strong, in fact, that the race has become about her. And Democratic operatives from presidential campaigns past and present say the only way for any other candidate to win the nomination is to make an even stronger case against her.

"If this were a wedding, we'd be at the 'speak now or forever hold your peace' part," said Steve McMahon, who advised Howard Dean in 2004. "If you're a candidate hoping to get past her, the time for nuance and veiled references has passed."

There is always the chance that Clinton could make an error in the next couple of months that would hurt her chances. Some argue that her vote against Iran at a time when anti-war Democrats are concerned about war there has the potential to damage her standing.

But Democratic insiders, including some working on various 2008 campaigns who spoke on condition of anonymity, agree that barring a major stumble, Clinton is all but sure to win the nomination if she wins the opening contest in Iowa . She is polling well in the states that follow, and no one else would be able to challenge her unless an Iowa loss made her look vulnerable.

But that's a big if. Clinton has called Iowa her "hardest state," and it's the best - some say only - chance her opponents have to get past her.

"At this point the trailing candidates need to not only catch a huge wave, they also need one to crash on top of Hillary," Newman said. "They need to upend the conventional wisdom that is gelling among donors and others that she can't be stopped, and they need to prove it in Iowa ."

The most recent polls in the state show a close race among Clinton and fellow Sens. John Edwards and Barack Obama.

Edwards has been making a more vigorous case recently against Clinton's ability to win a general election. He hs also led criticisms of her that have been picked up by other candidates - that she's too connected to lobbyists and that her vote to declare the Iranian Revolutionary Guard a terrorist organization could be a repeat of her mistake in voting for the Iraq war.

Those criticisms haven't hurt her yet, but they could as more people begin to pay closer attention in the closing days of the race. Some advise that the Clinton campaign should consider fighting back against Edwards or anyone else who takes her on so directly.

"While Edwards is attacking her as being unelectable, the GOP (Republican Party) is also saying she is polarizing and out of the mainstream," said Donna Brazile, who ran Al Gore's campaign in 2000. "Time to deck them or push back."

Joe Biden and Chris Dodd have been more aggressively criticizing her on foreign policy. Obama says there needs to be a change away from Washington insiders while generally avoiding mention of her name.

And at a time when Obama needs to be winning voters away from Clinton, instead he has been playing defense. Just this week he's been under fire from gay activists who objected to a participant in his gospel concert series, and his campaign agreed to return some donations after The Washington Post reported that they came from children.

Most of those interviewed say Obama needs to get tougher on Clinton .

In comparison to Obama, Simmons said, "people are very clear what John Edwards is running for. He's there fighting for the working man and woman, and he's taking his shots. Even at some times he may seem to the outside world to be too strident and hitting it too hard. But he's hitting, and people respect that."

But some inside the Clinton and Obama camps think it would be a mistake for Obama to go on the attack in a multi-candidate race. They ask: Why not sit back and let Edwards and others try to take her down, while he tries to rise above?

"I think with name ID as high as Senator Clinton's, there is little new information about her that would change voter's minds," said Erik Smith, who worked for Dick Gephardt in 2004. "A candidate can move late in Iowa if making a strong case for themselves as the best candidate to win the general."

That happened in the last Iowa presidential primary. In 2004, Dean was the front-runner, and Gephardt went after him hard. Dean and Gephardt fell into third and fourth place respectively in the caucus, behind John Kerry and Edwards.

"Her opponents will have opportunities to slow her down, but the risks of doing what that will take come at a considerable risk," said Democratic consultant Michael Feldman, who works for Gore. He is not aligned with any campaign this election cycle, but has donated to Clinton. "Take Senator Obama, for example. It's hard to slash and burn when you have said that you want to move beyond negative campaigning. He runs a serious risk of undermining his brand."

And there is no indication it would work since she has done well with what has come at her so far. "There is no doubt that she will be tested, but she is running the kind of campaign that indicates her ability to roll through those inevitable challenges," Feldman said.