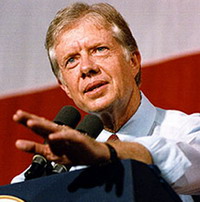 "We've seen some very serious needs in the global health system," Carter told reporters, adding that the primary purpose of the meeting was "to ascertain an expanded role for the secretary-general of the United Nations in global health care."

The U.N. addresses health care issues through its World Health Organization, which has a two-year budget of $3.3 billion (2.3 billion EUR). The world body also supports the Global Fund to Fight AIDS, Tuberculosis and Malaria.

The former president said his Carter Center has been involved with a range of activities over the last 25 years, including helping with elections and negotiating peace agreements, but that three-quarters of the organization's budget and personnel is devoted to neglected diseases.

The still energetic, 83-year-old Carter got in a shouting match with Sudanese security officials during the trip, accusing them of preventing him from meeting with representatives of ethnic African refugees in Darfur.

The group toured the Darfur region, urging all sides in Darfur's bloodshed to reach a peace deal.