Two burned bodies were found in a gutted house. Flames drew perilously close to thousands of homes in Southern California. 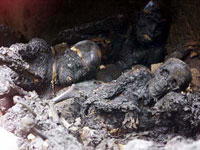 Medical examiners were trying to establish the identities of the bodies found near Poway, north of San Diego, Sheriff Bill Kolender said.

Flames also have claimed the life of a 52-year-old man in Tecate. The San Diego medical examiner's office listed five other deaths as connected to the blazes because all who died were evacuees. The number of victims could rise as authorities return to neighborhoods where homes burned.

The grim announcement came as the firefighters, aided by the calming Santa Ana winds and dropping temperatures, looked to gain control of some of the most severe fires.

Bush, who has declared a major disaster in a seven-county region, arrived in California to take an aerial tour of the burn areas, accompanied by Gov. Arnold Schwarzenegger.

Memories still linger of the U.S. government's failed response Hurricane Katrina and how it hurt Bush's standing. The tricky matter of when to time a presidential tour - one that itself commands state and local resources - was one the White House had to work through.

Bush, who was getting an aerial tour of the devastation wrought by blazes fanned by Santa Ana winds, was greeted on the tarmac at Marine Corps Air Station-Miramar here by Schwarzenegger and the smell of smoke.

The president also was getting a look at the situation on the ground. But first came the helicopter tour inspection of the wildfire damage and a visit to a San Diego neighborhood. He was then traveling north to Escondido to assess that area's damage, talk about recovery efforts and have lunch with emergency responders.

"It's a sad situation out there in Southern California," Bush said outside the White House before leaving for California. "I fully understand that the people have got a lot of anguish in their hearts. They just need to know a lot of folks care about them."

Some evacuees were being allowed back into their neighborhoods, and shelters were emptying. Qualcomm Stadium in San Diego, which sheltered more than 10,000 people at the height of the evacuations, had just 2,500 people left Thursday morning.

The hot, dry Santa Ana winds that have whipped the blazes into a destructive, indiscriminate fury since the weekend were expected to all but disappear. "That will certainly aid in firefighting efforts," National Weather Service meteorologist Jamie Meier said.

But electricity was a concern. A wildfire cut a main power link with Arizona, while another blaze near Camp Pendleton was threatening the main north-south power corridor that connects San Diego with the rest of California. Additional power was being shipped from Mexico, said Sempra Utilities Chief Operating Officer Michael Niggli.

About 19,500 customers were without power Wednesday either because of downed lines or to ensure the safety of firefighters, officials said.

Even with the slackening winds, the San Diego County remains a tinderbox. Firefighters cut fire lines around the major blazes, but none of the four fires was more than 40 percent contained. More than 8,500 homes were still threatened.

Towns scattered throughout the county remained on the edge of disaster, including the apple-picking region around Julian, where dozens of homes burned in 2003.

To the northeast, in the San Bernardino County mountain resort of Lake Arrowhead, fire officials said 6,000 homes remained in the path of two wildfires that had destroyed more than 300 homes.

The fires remained out of control, but were being bombarded by aerial tankers and helicopters that dumped more than 30 loads of water.

So far, at least 15 fires have destroyed about 1,500 homes in Southern California since late Saturday.

The burn area of nearly 460,000 acres (186,160 hectares) stretches in a broad arc from Ventura County north of Los Angeles east to the San Bernardino National Forest and south to the U.S.-Mexico border.

Losses total at least $1 billion (€700 million) in San Diego County alone, and include a third of the state's avocado crop. The losses are half as high as those in Southern California's 2003 fires, but are certain to rise.

The more hopeful news on the fire lines came a day after residents in some hard-hit San Diego County neighborhoods were allowed back to their streets, many lined with the wreckage of melted cars.

In upscale Rancho Bernardo, house after house had been reduced to a smoldering heap. Cheryl Monticello, 38 and eight months pregnant, had to see for herself that her home was gone. Only the white brick chimney and her daughter's backyard slide survived the inferno.

"You really need to see it to know for sure," Monticello said Wednesday.

As nature's blitzkrieg starts to recede, many of the other refugees will be allowed back to their neighborhoods. More than 500,000 people were evacuated in San Diego County alone, part of the largest mass evacuation in California history.

In the middle of the arc of fire, the Santiago Fire in Orange County had burned nearly 20,000 acres and destroyed nine homes. Only 50 percent contained, it is a suspected arson fire.

Agents from the FBI and the federal Bureau of Alcohol, Tobacco, Firearms and Explosives were sent to help investigate. Authorities said a smaller, more recent fire in Riverside County also is linked to arson.