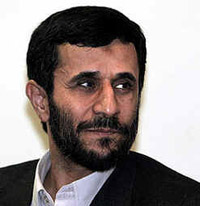 The new negotiator, Saeed Jalili, accompanied by his predecessor, Ali Larijani, met Tuesday with European Union foreign policy chief Javier Solana in Rome. The talks were Jalili's first since his surprise appointment over the weekend.

Both sides described Tuesday's meeting as constructive and said more talks would likely be held by the end of November. The United States and its European allies are hoping to persuade Iran to suspend its uranium enrichment program, as demanded by the U.N. Security Council.

On Wednesday, the two Iranians held talks with Prodi, whose country is Iran's No. 1 trading partner in the EU and, as of this year, is on the U.N. Security Council as a non-permanent member.

Solana, who met over breakfast with Italian Foreign Minister Massimo D'Alema, was scheduled to meet with Prodi later in the day.

The departure of Larijani was widely interpreted as a victory for hard-line President Mahmoud Ahmadinejad, raising questions about whether Tehran had decided to take an even more defiant position in the standoff with the West.

Shortly before Tuesday's talks began, the Iranian president vowed not to give up "one iota" on the right to enrich uranium.

Though a conservative, Larijani was considered more moderate than Ahmadinejad within Iran's hard-line camp and had reportedly differed with the president over how to approach nuclear talks.

Jalili, an Ahmadinejad loyalist, insisted that Tehran's line would not change, and he received the support of Larijani.

"Negotiation and cooperation is our basic approach," Jalili said after Tuesday's meeting. "The course that we'll continue will be the same trend that he (Larijani) has pursued in this period of time."

The United States and some of its allies accuse Iran of secretly trying to develop nuclear weapons and have demanded it halt uranium enrichment, a technology that can be used in both civilian and military programs. Tehran denies the claim, saying its program is for peaceful purposes, including generating electricity.

Iran's refusal to suspend uranium enrichment has led the U.N. Security Council to impose two sets of sanctions against Tehran.

The United States, Russia, China, Britain, France and Germany, with EU support, agreed last month to delay until November any new U.N. resolution to toughen sanctions, giving Iran more time to cooperate with an investigation into past nuclear activities that is being conducted by U.N.'s nuclear watchdog, the International Atomic Energy Agency.

Ahmadinejad has said he believed the nuclear issue was over. But he also said this month that the government was prepared to answer questions from the IAEA.

Speaking to reporters after the Rome talks, Larijani was dismissive of speculation about his resignation and alleged differences with Ahmadinejad. He said the replacement was just a matter of a generational change.

"The point is our country is a democracy, there is rotation and circulation of forces and powers," he said. "Jalili is a friend of mine, seven or eight years younger, energetic."

Jalili, 42, fought in Iran's war with Iraq in the 1980s as an officer in the Revolutionary Guards. With a Ph.D in political science, he has been a career diplomat since the late 1980s.

Named by Ahmadinejad as deputy foreign minister for European and American affairs, he has in the past served as a quiet envoy for the president, taking messages to European officials. He accompanied Ahmadinejad on a recent visit to New York. He has also frequently defended Iran's nuclear program to the foreign press.