UN to resume food to Somalia

As a top U.N. aid official was released by Somalia’s government, so the United Nations will resume food distribution to tens of thousands of Somalis in Mogadishu , humanitarian chief of the organization said Wednesday. 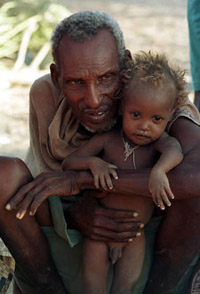 UN to resume food to Somalia

The U.N. is also trying to learn what Somali officials are accusing Idris Osman of doing, said John Holmes, undersecretary-general for humanitarian affairs. Osman, head of World Food Program operations in Somalia, was freed in Mogadishu on Tuesday after being jailed for nearly a week.

The seizure of Osman Oct. 17 when dozens of armed security agents stormed a U.N. compound was only the latest in a long series of setbacks for humanitarian workers trying to help people in the war-battered country.

Osman will go to Nairobi, Kenya, where he will continue his work, Holmes told The Associated Press in an interview at U.N. offices in Geneva.

"If he hasn't left the country already, he's about to," Holmes said. "And then there'll be a discussion with the government about what they had against him, which they never really explained other than vague references to terrorism, and then we'll try and sort it out."

Gen. Mohamed Warsame Darwish, intelligence chief of the transitional federal government, said Tuesday that Osman had been granted bail, but U.N. officials said no bail money was requested from the world body.

Holmes said U.N. officials knew of no reason why the Somalis arrested Osman, but he said everything in the country becomes political, including food aid, to whom it is given and how.

"The politics are very complicated and getting more complicated and difficult," he said. "I suspect he may have gotten caught up in that in some way, not as an individual but what the World Food Program was doing at that particular moment. But we really don't know."

After Osman's arrest the U.N. agency shut down food deliveries to about 76,000 recipients in the Somali capital, citing security problems.

About 1.5 million Somalis need food aid and protection - 50 percent more that at the start of the year _ due to inadequate rains, continuing internal displacement and a potential cholera epidemic, according to the United Nations.

Mogadishu has been plagued by fighting since government troops and their Ethiopian allies chased out the Council of Islamic Courts in December. Remnants of the Islamic group have vowed to fight an Iraq-style insurgency.

Somalia has not had a functioning government since 1991, when warlords overthrew dictator Mohamed Siad Barre and then turned on each other.

Holmes said the U.N. would continue its humanitarian work in Somalia despite the problems.

Conditions are worsening, he said.

Few of the people who have left Mogadishu because of security problems have gone back, and others are still leaving in "a classic combination" of people who have fled flooding and now are coping with disease and the effects of previous droughts.

"We absolutely have to go on doing what we're doing to keep people alive while the search for political progress goes on," Holmes said. "So we'll hang in there as long as we possibly can and do the best job we can."

Many people are so desperate that they try to flee the country, but there are restrictions on the border with Kenya so some become boat people trying to reach Yemen across the Gulf of Aden.

"They're very easy prey to these traffickers who are putting them in inadequate boats and throwing them out half way across or whatever it is they're doing," Holmes said. "The death toll is horrifying."