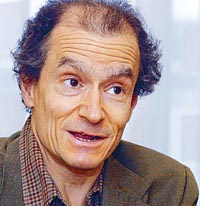 While Russia and Washington are trying to resolve missile defense problem, the program is going on, a senior American diplomat on Wednesday, defending plans for a U.S.-built missile defense system in Europe.

Assistant Secretary of State for European and Eurasian Affairs Daniel Fried told reporters in Berlin that the U.S. was determined to try to work with the Russians and develop common ground on missile defense.

"We explained this to the Russians," Fried said, adding "that doesn't mean that they get a veto over our programs."

The Pentagon wants to install 10 interceptor rockets in Poland which, when linked to a proposed tracking radar in the Czech Republic and to other elements of the existing U.S. missile defense system based in the United States, is designed to defend all of Europe against a long-range missile fired from the Middle East.

The proposal has been presented to the Russians, who strongly oppose having U.S. missile defense bases in Europe, saying it is a threat to their nuclear deterrent.

There had been some confusion this week over whether the United States might delay activating its proposed missile defense sites in Europe to placate Russian opposition.

U.S. Defense Secretary Gates told a news conference Tuesday in the Czech Republic that the administration might delay activating the proposed missile defense sites until it has "definitive proof" of a missile threat from Iran.

However, U.S. President George W. Bush said later on Tuesday that the plans for a missile defense system in Europe are urgently needed to counter an emerging threat of attack by Iran. "The need for missile defense in Europe is real, and I believe it's urgent," Bush said in Washington.

The president tried to placate the Russian concerns, however, emphasizing again that the Russian nuclear arsenal could easily overwhelm the small defense system.

Fried suggested there was no contradiction between Bush's remarks and those by Gates, saying that the secretary of defense's remarks were "very clear and completely consistent with our position."