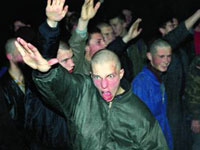 The march, which was condemned by Jewish leaders, was already banned by Prague on Oct 4 because it would lead to "inciting hatred and intolerance of citizens because of their nationality, origin and religious faith."

"We will do all we can to prevent the march scheduled for the anniversary of Kristallnacht from taking place," City Hall spokesman Jiri Wolf said. He said city officials will decide what steps to take after they receive the court verdict, which is expected to happen this week.

"We still have means" to stop it, Wolf said. He did not give details.

Ryba, said court annulled the ban because of procedural issues. He declined to elaborate.

The march is scheduled to take place Nov. 10, a day after the anniversary of Kristallnacht - the 1938 night of terror when the Nazis attacked synagogues and Jewish homes and businesses throughout Germany and parts of Austria.

The march was organized by the Young National Democrats, which is linked to the National Resistance, a neo-Nazi group. Organizers said it was meant to protest the deployment of Czech troops in Iraq.

Members of the Jewish community, including the Jewish Museum director Leo Pavlat and community leader Frantisek Banyai, said they considered the march an insult to the Jewish victims of the Holocaust.

"It's a serious thing," Banyai said Tuesday. He said Jewish leaders planned to discuss what to do later Tuesday and Wednesday.

He said the community planned a religious gathering at the Jewish quarter on Nov 10 and will call on its members to attend in large numbers.

He also linked the inability of authorities to ban neo-Nazi activities to the latest case of a Jewish cemetery desecration, which was discovered late Monday.

At least 13 tombstones were overturned at the Jewish cemetery in the village of Hroubovice, 100 kilometers (60 miles) east of Prague, and some of them were broken, Banyai said.

"It is indisputable that the current inability to stop the obvious neo-Nazi march encourages this kind of vandalism," Banyai said.

Pavlat had said earlier that he expected many people to come to the neighborhood in question to prevent the right-wing marchers from entering. A group called the Jewish Liberal Union has issued an appeal, calling on "all our friends to come to support our active defense against the neo-Nazis."