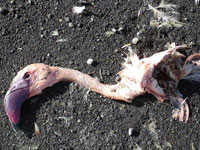 Four flamingos were killed by intruders in Frankfurt's famed zoo. The violators ripped three of the bird's heads from their bodies.

A fourth bird was found strangled to death, police said, adding that the birds were killed inside their enclosure by an intruder who sneaked into the zoo between Monday night and Tuesday morning.

The zoo counts several flamingos among its menagerie of animals that includes rhinoceros, lions, elephants, giraffes and scores of different birds, insects and reptiles.

The zoo said three of the birds killed were more than 30 years old. The fourth was a Chilean flamingo, a species native to South America.