A second Canadian pedophile's victim testified that he had been sexually abused four years ago. Thus additional charges will be filed against Christopher Neil. 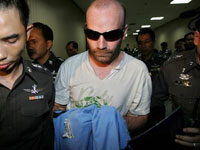 The suspect, schoolteacher Christopher Neil, was arrested in Thailand last Friday after Interpol issued a worldwide appeal to identify and apprehend him.

Also Tuesday, a 74-year-old British man was arrested in the seaside resort town of Pattaya for allegedly sexually abusing a teenage boy in an unrelated case.

Neil had been sought by police since photos appeared on the Internet allegedly showing him sexually abusing boys in Cambodia, Vietnam and Thailand several years ago.

Thai police charged Neil last week with sexually abusing a boy who was 9 years old in 2003. Police said additional charges would be filed after the boy's older brother, who was 14 at the time, also testified that he had been sexually molested by the suspect.

Neil has denied any wrongdoing, according to police. He refused to speak to an Associated Press reporter who visited him Tuesday at Bangkok Remand Prison.

Photos of the siblings were among some 200 pictures found by Interpol on the Internet in which the face of the perpetrator was digitally obscured.

After German police computer experts managed to unscramble the photos so the man's face was recognizable, Interpol circulated them publicly, and tip-offs led them to identify Neil as the suspect.

In the new case, a British man identified by police as Alan Charles Mawson, of Barrow-in-Furness, was arrested in his apartment in Pattaya, about 110 kilometers (70 miles) southeast of Bangkok, said police Capt. Sorakit Thanyasri. He said hundreds of photos and pornographic videos of naked boys and men had been found in his home.

The arrest came after a 14-year-old Thai boy filed a police complaint that he was abused by Mawson.

Mawson was charged with sexual abuse of a child under 15. He denied the charge, Sorakit said.

Several countries in Southeast Asia are popular with pedophiles because of poverty that drives children and their parents to accept money for sexual favors, and because of lax law enforcement.