Chicago's City Council members demanded a U.S. judge for confidential information about police officers who have been repeatedly insulted civilians. 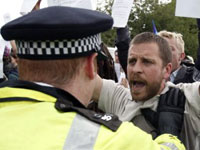 The request comes amid allegations of police misconduct, including charges that seven members of an elite unit beat and shook down civilians and that one member plotted to kill a fellow officer.

The 50-member council must have the documents because they may disclose "patterns of criminal activity," the 28 members wrote in their petition.

They seek a list with the names of 662 officers accused of abusing civilians in more than 10 complaints from 2001 to 2006, documents showing the allegations and what, if anything, the city did to investigate.

City Council members said they had no success in getting the documents from city attorneys.

A spokeswoman for the attorneys' office, Jennifer Hoyle, said officials were reviewing the petition "to determine if there's any way to satisfy what they are seeking while still preserving our legal arguments" before the appeals court.

Most of the latest controversy surrounding the police department has centered on the elite special operations division created to stop on drug-dealing street gangs.

Seven members of the unit are charged with abusing civilians, and one is facing federal charges that he plotted to kill another officer to assure his silence. City officials plan to disband the special operations unit.