US might delay activating missile defense in Poland and Czech Republic

U.S. Defense Secretary Robert Gates declared Tuesday that until the United States has "definitive proof" of a missile threat from Iran U.S. might delay activating its proposed missile defense sites in Europe. 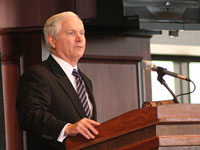 US might delay activating missile defense in Poland and Czech Republic

At a news conference after meeting Czech Prime Minister Mirek Topolanek, Gates said this was a proposal to the Russians - who strongly oppose the U.S. missile defense - that has yet to be worked out in detail.

"We would consider tying together activation of the sites in Poland and the Czech Republic with definitive proof of the threat - in other words, Iranian missile testing and so on," Gates said with Topolanek at his side.

The United States wants to build a missile interceptor base in Poland and a radar site in the Czech Republic, but details have yet to be negotiated.

U.S. officials have said that the proposal tying activation of the European sites to proof of an Iranian threat was presented to the Russians by Gates and Secretary of State Condoleezza Rice earlier this month. But Gates' remarks in Prague were the most specific and clear that such a proposition raises the prospect of delay.

Much of the disagreement between Washington and Moscow over missile defense in Europe has centered on the question of when Iran's missile program would reach the stage where it could threaten all of Europe and the United States. The Russians say that is a far-distant prospect; the Americans say it is coming soon.

Asked whether having Russians on his territory would be acceptable to the Czech government, Topolanek pointedly declined to say. "No comment," he said through an interpreter. Prior to the breakup of the Soviet empire, Czechoslovakia was part of the Warsaw Pact that opposed the U.S.-led NATO alliance.

Gates stressed that any proposal that involved allowing a Russian presence on Czech soil as monitors or inspectors of the radar site would be presented first to the Czech government and would not be negotiated with the Russians unless the Czechs agreed. Topolanek nodded his head.