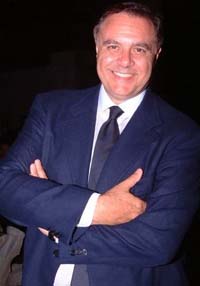 Italian Prime Minister Romano Prodi was warned Tuesday that his government would be brought down because of infighting over justice policy and a corruption investigation reportedly involving senior center-left leaders.

Justice Minister Clemente Mastella, head of a centrist party that is vital to Prodi's majority in Parliament, warned that the government would fall if the disagreements were not cleared up at a Cabinet meeting later Tuesday.

If the issue is not resolved, "it will no longer be possible to keep the current coalition alive," Mastella said in a statement issued by his UDEUR party.

Mastella has been trading barbs with Infrastructure Minster Antonio Di Pietro, a former anti-corruption prosecutor, over a corruption investigation being led by a prosecutor in southern Italy.

Italian news reports have said Prodi and Mastella are being investigated by prosecutor Luigi De Magistris in the city of Catanzaro for allegedly misappropriating European Union funds. Both Prodi and Mastella have denied wrongdoing and have said they have not been informed formally that they are under investigation.