The wife of U.S. President George W. Bush arrived in Riyadh on Tuesday to launch the Breast Cancer Partnership program, a new initiative to fight cancer by raising awareness about the disease and increasing breast cancer research. 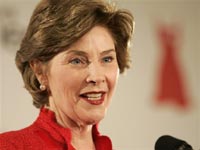 Bush, who was making her first trip to the kingdom, was greeted at the airport by Prince Faisal bin Abdullah, the king's son, who is honorary president of the Saudi Cancer Society. She wore a blue pant suit and was not wearing the traditional black cloak that all women in Saudi Arabia must wear except for visiting female dignitaries.

Bush will visit the Abdul-Latif cancer screening center, the country's first, before signing the U.S.-Saudi Arabia Partnership for Breast Cancer Awareness and Research agreement at the King Fahd Medical City. The kingdom will be the third country to take on the program.

Later Tuesday, Bush travels to the western seaport city Jiddah, where she is scheduled to meet with King Abdullah to discuss the program and talk about the work of the U.S. partners with the Saudi partners in breast cancer.

On Wednesday, Bush participates in a "Breaking the Silence" coffee with members of the Jiddah Community.

The program will teach women about the disease and provide them with "the confidence they need to be in charge of their own health," the first lady said at the Susan G. Komen Breast Cancer Foundation 2006 Mission Conference in Arlington, Virginia.

The program was organized by the U.S. State Department and includes the Susan G. Komen Foundation with MD Anderson Cancer Center in Texas, Johns Hopkins Medicine in Maryland, the United Arab Emirates and Saudi Arabia.

Bush, whose mother and grandmother suffered from breast cancer, arrived from the United Arab Emirates, where she also raised breast cancer awareness and avoided political issues.

From Jiddah, Bush travels to Kuwait, where she will meet with women democratic reformers, legal advocates and business leaders and visit with individuals involved in partnership initiative programs, including those on education.

The U.S. first lady last visited the Middle East in 2005, stopping in Jordan, Egypt, Israel and the Palestinian territories to promote freedom, education and the role of women.