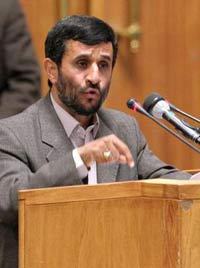 The Armenian government had expected Ahmadinejad to address parliament and, in what was likely to cause controversy, plant a sapling at a memorial commemorating the victims of what Armenians consider genocide.

Viktor Sogomonian, press secretary of Armenian President Robert Kocharian, gave no reason for the Iranian president's decision to skip both planned events and return to Iran.

Scholars view the World War I-era killing of 1.5 million Armenians, who were Christians, as the first genocide of the 20th century. But debate on a resolution in the U.S. Congress that would recognize the killings as genocide has angered Turkey, which says the toll has been inflated and that those killed were victims of civil war and unrest.

Ahmadinejad avoided taking sides on the issue Monday in a speech before Armenian university students, saying only that Iran condemns any crimes against humanity.

He has caused outrage in the past by suggesting that the Holocaust is a "myth" invented by Jews. An estimated 6 million Jews were killed during the Holocaust.

The projects are important for landlocked Armenia, which has struggled with power shortages and transport blockades since the collapse of the Soviet Union. Neighboring Azerbaijan and Turkey have shut their borders with Armenia in the wake of a conflict over Nagorno-Karabakh, a breakaway region of Azerbaijan controlled by ethnic Armenians.

The two leaders did not touch on international issues at their joint news conference, but Ahmadinejad later launched a thinly veiled attack on U.S. policy in his speech at the Armenian State University.

"The world must be governed by good, striving for justice and morality," Ahmadinejad said. "If the leaders of great powers proceeded from these values, there wouldn't have been occupation of Iraq ... and bloodshed in Afghanistan and Palestine."