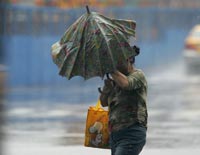 More than 8 inches (20 centimeters) of rain fell on parts of the city by late afternoon Monday, and people were asked to stay indoors until the flood potential subsided. More rain was expected overnight.

Waist-high water in parts of eastern New Orleans soaked businesses, some of which had recently reopened after being damaged by Katrina in 2005.

All the city's pumps were working properly, emergency preparedness officials said. Still, they urged motorists to stay off the streets to avoid creating wakes that could send water into homes and businesses.

Officials with the U.S. Army Corps of Engineers closed a gate on a suburban canal where the waters threatened to top the walls; it was one of several in the area placed under new safety guidelines after Katrina flood waters breached two New Orleans canals, causing catastrophic flooding.

The corps has worked to strengthen the canal, about 5 miles (8 kilometers) from downtown, but engineers worried that water being driven into it might lead to flooding.

Engineers want to be sure "that we don't put pressure" on the flood walls, said Amanda Jones, a corps spokeswoman.

Water accumulated quickly in some older neighborhoods, a reminder of the city's vulnerability to storms and reliance on a complicated system of pumps and canals for drainage.

Robert Ricks, a lead forecaster with the National Weather Service, said a flood watch was extended to midnight Monday and that some areas could expect 10 inches (25 centimeters) or more of rain. Much of southeast Louisiana remained under a flood warning until Tuesday morning.

Despite the flooding potential, the rain also offered relief to parts of Louisiana that have been abnormally dry. Almost one-third of the U.S. Southeast is covered by an "exceptional" drought - the worst drought category.