South Korean President Roh Moo-hyun said Tuesday the government has decided to extend the country's troop deployment in Iraq for another year - a move expected to face tough opposition in parliament. 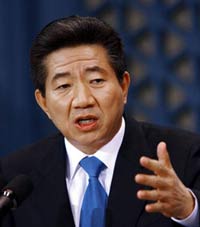 In a nationally televised address, Roh said the government made the decision in consideration of the country's alliance with the United States and South Korea's economic interests in Iraq.

South Korea has 1,200 troops in Iraq, but the government says it will halve this number.

Their mission is due to expire at the end of this year. Washington has asked for an extension.

"We're at a time when we need close cooperation with the United States more than any other time," Roh said, citing Seoul's efforts to resolve the international standoff over North Korea's nuclear weapons program and to improve relations with Pyongyang.

The National Assembly endorsed a one-year extension of the dispatch late last year after the government promised to draw up a pullout plan this year.

"Fellow citizens, please understand (the decision) generously," Roh said. "I also make a sincere appeal to politicians to make a wise judgment on what would be good for having peace take root on the Korean peninsula."

Given the generally negative public view of the deployment, heated debates are expected in parliament.

South Korean troops have been stationed in Iraq on a reconstruction mission since 2003.

Troop levels once reached 3,600 - which made Seoul Washington's biggest coalition partner after Britain - but gradually declined amid rising public opposition to the mission.