American nun killed out of fear

An American nun and rain forest defender Dorothy Stang was killed out of fear and rage. Exactly so explained the killer his crime to the jury at his retrial Monday. 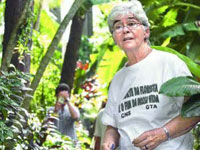 American nun killed out of fear

Rayfran das Neves Sales was sentenced in 2005 to 27 years in prison for shooting Stang six times with a .38-caliber revolver on a muddy road deep in the heart of the Amazon rain forest that same year. Brazil grants an automatic retrial for any sentence longer than 20 years in prison.

Stang, 73, spent the last 30 years of her life defending poor settlers in the violence-plagued rain forest region and prosecutors say two ranchers hired Sales to kill her because of a dispute over a piece of forest they wanted to clear for pasture.

Many see the trial as a test of Brazil's commitment to prosecuting the sort of land-related killings that have taken more than 800 lives in Para state alone. Only a handful of killers have ever have been convicted.

Sales "admitted firing the shots, but denied he was contracted by anyone to do it and said he killed her because she had threatened him," court spokesman Gloria Lima said in a telephone interview from Belem, the capital of Para state.

"His argument is basically an attempt to get a lighter sentence," Lima added.

Sales' testimony also seeks to clear rancher Vitalmiro Bastos de Moura, who was convicted in May of ordering Stang's killing and sentenced to 30 years in prison. Moura's automatic retrial is set for Thursday.

Two accomplices convicted in the killing received sentences of less than 20 years and do not get retrials.

Another rancher, Regivaldo Galvao has also been accused of ordering Stang's killing but remains free on bail with no trial date set.

In various depositions, Sales has sometimes implicated the ranchers and sometimes denied they had anything to do with the killings.

At the first trial, Sales said he shot Stang after he mistook the Bible she was taking out of her bag for a gun.

Prosecutors allege Moura and Galvao offered Sales and his accomplice Clodoaldo Carlos Batista 50,000 reals (US$25,000;€18,000) for the killing.

A Brazilian Senate commission found it was part of a wider conspiracy involving a number of ranchers, but only Moura and Galvao have been charged with orchestrating the shooting.

Only two witnesses for the defense are expected to testify at the trial which is expected to end Tuesday.

Prosecutors have called no witnesses and expected to rely on earlier testimony and a videotaped reenactment of the crime which shows Sales firing an empty revolver at a woman standing in for Stang at the murder site.

Stang, who was born in Dayton, Ohio, has evoked comparisons to Chico Mendes, the rain forest defender who was killed in 1988 in the western Amazon state of Acre.