NASA gave out an unfavourable forecast for the scheduled launch of space shuttle Discovery, reporting low clouds and rain would be moving in right around the planned time of the liftoff. 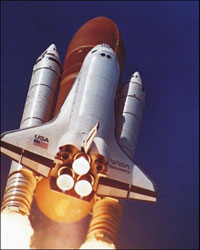 Winters said it will boil down to a matter of luck. It is possible the rain and clouds will stay away until just after launch time.

"There's some wiggle room in there," she said.

The weather at the emergency landing sites in Europe also was not looking too good for the entire week.

Everything else, at least, seemed to be going NASA's way. The countdown was progressing without any major complications, said NASA test director Stephen Payne.

Discovery and a crew of seven, led by commander Pamela Melroy, will carry up a pressurized compartment to the international space station that will serve as the docking port for the European and Japanese laboratories that are supposed to fly in the next few months.

Called Harmony, the 24-foot (7-meter)-long compartment _ about the size of a small bus _ was built by Italy for NASA. It will be the first live-in chamber delivered to the space station since a pair of airlocks went up in 2001.

The European laboratory is targeted for a Dec. 6 launch aboard shuttle Atlantis, but the schedule is so tight that each day that Discovery's two-week flight gets delayed, the lab mission also will slip. Japan's lab is scheduled to be launched in two pieces by shuttles in February and April, and that, too, could end up being postponed.

NASA is under orders to complete the space station and retire the three shuttles by 2010.

The final portion of Discovery's launch countdown will be altered slightly so that the super-cold fuel is inside the external tank for an hour less than normal. Shuttle managers hope that will cut back on ice formation, which is believed to have contributed to a chunk of foam insulation breaking off on the last launch.

The small piece of foam from a bracket on the tank _ which has since been modified _ left a gouge in Endeavour's belly. Ice may have been part of the debris as well.