Dublin criminal gets lead in taxi

A Dublin criminal was killed Monday. He embarrassed the government this year by telephoning Ireland's state broadcasting network from his prison cell. 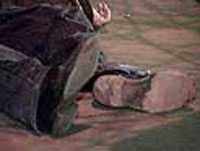 Dublin criminal gets lead in taxi

John Daly, 27, was hit five times point-blank as he arrived home about 2 a.m. (0100GMT) in a taxi in Finglas, a crime-ridden district of northwest Dublin. Police said his friends in the vehicle - two men and three women -- were not injured.

Daly won parole two months ago after serving part of a sentence for armed robbery. Both inside and outside jail, he was a widely feared enforcer for a Finglas drug-dealing gang led by Martin "Marlo" Hyland, who was assassinated a year ago.

Daly generated national headlines in May when he called a popular afternoon phone-in show on state broadcasters RTE from his cell in a top-security prison. A guard abruptly ended the interview after about three minutes.

His actions threw the spotlight on the common use of smuggled, hidden mobile phones by inmates in Ireland's prison system. The government ordered cell-by-cell searches that recovered 1,300 phones - as well as contraband ranging from flat-screen televisions to parakeets.

Police Superintendent John Hartnett, who is leading the murder investigation, said Daly's killing appeared to be part of a professionally planned ambush. He said the gunman picked out Daly sitting in the front passenger seat of the taxi, and sped off in a vehicle that had its license plates removed and was torched to destroy forensic evidence.

Crime experts said Daly had accrued so many enemies that any number of gangs could have been responsible for killing him. Indeed, his action highlighting the common ownership of mobile phones angered many inmates across Ireland's prison system who lost their phones following his interview.

Daly himself was suspected of committing several unsolved killings but was never charged with murder. One victim who survived, Liam McAllister, identified Daly as the man who shot him in 2003. But McAllister - a nephew of Gerry Adams, leader of the IRA-linked Sinn Fein party - fled to Northern Ireland and refused to cooperate with the police investigation.

The senior Sinn Fein politician in Finglas, former IRA bomb-maker Dessie Ellis, said the area was in the grip of rival gangs. He wasn't surprised that Daly became the latest casualty.

"There was word on the streets that John Daly wasn't going to last very long. The fear factor in a lot of areas is very, very strong," Ellis said.

Ireland's national police force has struggled to contain gun violence by Ireland's drug-dealing gangs over the past decade. Twenty-seven people were shot to death last year, and four in the past month alone.

"I think as a community and as a system we have to stop being tolerant of these people," Ahern said. "They expect us to look after their human rights and civil rights, but they have no respect for others. ... They're vicious thugs, and I think they have to be treated accordingly."

In his RTE interview, Daly launched a vulgar tirade against Paul Williams, crime editor of the Sunday World tabloid, who has written several books exposing criminal kingpins and faced death threats because of it.

Williams said Monday that Daly had been allowed to walk free from prison on temporary license following his 2000 conviction for armed robbery, but was imprisoned again after assaulting and issuing death threats to police officers. He said Daly used his prison telephones to order underlings to shoot opponents or firebomb their homes.

He called Daly's RTE interview "a big wake-up call for this country, to hear a man like that ranting and raving from his prison cell."