US and Russia to strengthen relations

U.S. Secretary of State Condoleezza Rice urged the Russian government to reinforce the independence of its courts, its parliament and its media. 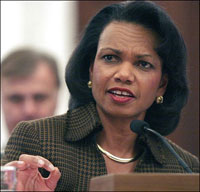 US and Russia to strengthen relations

Rice said that democratic reforms would strengthen Russia and improve relations with the United States.

The speech, at the opening of a conference on U.S.-Soviet history during part of the Cold War, comes at a time of heightened U.S.-Russian tensions and concern that Russian President Vladimir Putin is consolidating power in the central government. Russia has objected to U.S. plans to build a missile defense system in Eastern Europe and has bristled over U.S. criticisms of its human rights record.

But Rice, who has an academic background in Soviet studies, rejected comparisons between today's relations and those of the Cold War.