A cargo ship off the east African coast has been seized by Somali pirates. 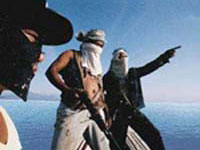 Gunmen attacked the vessel on Oct. 17, said Andrew Mwangura, the program coordinator of the East Africa Seafarers Assistance Program, but due to chaotic communications with war-ravaged Somalia the incident took several days to confirm.

He did not have details on the number or nationalities of the crew members aboard the Almarjan, a cargo ship of over 2,500 tons that was flying under a flag from the Comoros Islands and operated by Dubai-based Biyat International.

There were two other attacks on ships off the Somali coast on Saturday, he added, and one of the boats had been fired upon. Peter Smerdon, a spokesman for the U.N.'s World food Program, also said one of its ships had escaped an attack on Sunday by two speedboats full of pirates - the third attack on a WFP ship this year.

Somalia has suffered 26 reported hijackings this year, up from eight a year earlier, according to a report released last week by the International Maritime Bureau. Some hijackings have turned deadly - pirates killed a crew member a month after seizing a Taiwan-flagged fishing vessel in May off the northeastern coast of Somalia.

Mwangura said the increase could be linked to the overthrow of an Islamic group that had cracked down on piracy after seizing control of the Somali capital and much of southern Somalia last year.

The country, which has not had a functioning government since dictator Mohamed Siad Barre was overthrown in 1991, has been wracked by violence between the Islamic insurgents and government troops and their Ethiopian allies.

The shaky U.N.-backed government comes under daily attack by the Islamic insurgency in the capital and the country's coasts are virtually unpoliced.