Banksy originals to be auctioned

It is expected that ten original works by the English graffiti artist Banksy, including an image of Lenin on roller-skates and an elephant carrying a large bomb, will bring up to 300,000 pounds ( EUR 430,000 US$600,000) at an auction on Wednesday. 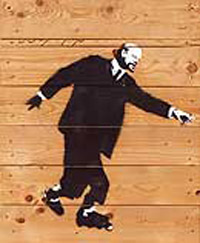 Banksy originals to be auctioned

The artist, who does much of his work on exterior walls, rarely offers originals for sale. A previous sale in April at Bonhams auction house included just four.

"It is the rarity factor that sells Banksy's works. He is the artist of the moment," Gareth Williams, senior picture specialist at Bonhams, said Monday.

The piece expected to top the bidding is "Avon and Somerset Constabulary," an image of two police officers peering through binoculars. It's estimated to sell for 60,000 pounds (EUR US$120,000) or more.

Banksy specializes in joky titles. The bomb-bearing elephant is titled "Heavy Weaponry," and the image of Lenin on inline skates is subtitled "Who Put the Revolution on Ice?"

Banksy refuses to give his real name, which has been variously reported as Robert Banks or Robin Banks.