Pakistan was given 30 helicopters, raising its capacity to fight Islamic soldiers by its border with Afghanistan, Pakistan's military announced Monday. 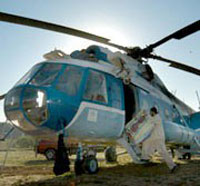 Patterson said the U.S. was fulfilling its commitment to meet Pakistan's security needs and reaffirmed its "long-term and strategic" commitment to the country, the statement said.

Maj. Gen. Syed Taqi Naseer Rizvi, director general of Army Aviation, said he hoped the helicopters would "go a long way in fortifying the country's capability to effectively combat the menace of terrorism," it said.

The United States gave eight refurbished Cobra helicopters to Pakistan in February and said another 12 would follow under a military aid package worth US$50 million (Ђ35 million).

Afghanistan, the United States and the NATO-led coalition fighting Taliban and al-Qaida rebels in Afghanistan are urging Pakistan to do more to stop the insurgents from using Pakistan's remote border areas to launch attacks.

Pakistan sent reinforcements into the frontier area in July, sparking fighting that has left hundreds of security forces dead or kidnapped.

Washington has given Pakistan about US$6 billion (Ђ4.2 billion) in security-related assistance since 2001 for assistance in the so-called war on terror.

It also agreed last year to sell F-16 fighter planes to Islamabad as part of a separate US$5 billion (Ђ3.5 billion) package.