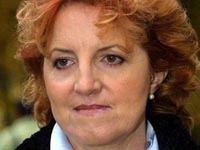 Czech Defense Minister Vlasta Parkanova said that her country would withdraw 80 of its 100 troops from Iraq in the second half of next year while increasing its force in Afghanistan.

The Czech troops are deployed in southern Iraq as guards at a British base.

Foreign Minister Karel Schwarzenberg said two weeks ago that his ministry was working on a plan for gradual withdrawal from Iraq. He said the Czechs would consult over the move with its allies in Iraq

The government also agreed on Monday to increase its contribution to the NATO-led mission in Afghanistan and to maintain its force in the Balkans, the minister said.

The Czech Republic has about 225 soldiers in Afghanistan as part of the NATO-led International Security Assistance Force and the number could reach 415 next year, Parkanova said.

The Czech Republic will also continue to participate in the NATO-led peacekeeping force in Kosovo with up to 550 soldiers in the mission known as KFOR, Parkanova said. Five servicemen will be deployed in the European Union mission in Bosnia in the first half of 2008, she said.

The plan for the Czech participation in foreign missions in 2008 still needs parliamentary approval.