The atrocious killing of a truck driver on Ireland's border raised tensions within Northern Ireland's power-sharing government and suspicions about the status of IRA. 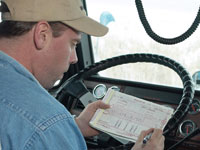 Paul Quinn, 21, died Saturday hours after being lured to a farmhouse and clubbed with metal pipes by several men. His apparent crime: crossing Irish Republican Army figures who control a fuel-smuggling empire in South Armagh, a primary power base for the outlawed group.

The IRA in 2005 formally renounced violence for political purposes and surrendered its weapons stockpiles, key conditions for the revival this year of a Catholic-Protestant administration in Northern Ireland. But the IRA - which has run smuggling operations in South Armagh for decades - remains the area's key power-broker.

Sinn Fein, the IRA-linked party that represents most Catholics in Northern Ireland, said the IRA was not responsible.

Sinn Fein leader Gerry Adams called on locals to help detectives identify the killers. He declined to answer questions about when, if ever, the IRA would disband, insisting the two issues were unrelated.

"The people involved are criminals. They need to be brought to justice and it is fairly obvious to me that this is linked to fuel smuggling and to criminal activity," Adams said.

Sinn Fein's Protestant partner in power-sharing, the Democratic Unionist Party, said their five-month-old coalition would be jeopardized by any confirmed IRA involvement.

"Clearly if the IRA has been involved in some way in the murder of Mr. Quinn then that will have very serious consequences in terms of the political process," said Democratic Unionist lawamaker Jeffrey Donaldson.

The village's veteran politician, Jim McAllister, said he was certain that Quinn was attacked because he beat two local IRA men in recent fights. He declined to say what they were fighting about.

Police said Quinn was lured to a remote farmhouse in County Monaghan, on the Republic of Ireland side of the border, by phone calls from two friends asking him to meet them there. Those two friends appeared later in a Northern Ireland hospital suffering from a range of wounds.

They told hospital officials they had been threatened with death if they didn't make the calls. Both wounded men checked themselves out of hospital before police could question them.

Quinn, who was conscious when police found him, reported being attacked by seven or eight men with metal clubs when he arrived at the farmhouse.

The IRA meted out potentially crippling "punishment" shootings and beatings on more than 1,000 Catholic civilians from the early 1970s to 2005. Such violence was intended to enforce IRA control of its Catholic turf and deter locals from cooperating with the predominantly Protestant police in Northern Ireland.

The victim's parents, brother and sister also accused the IRA of responsibility in a statement. They said Quinn recently received a threat from an IRA messenger "ordering him to leave the country. Our son courageously and correctly refused to leave."

A detective in the Police Service of Northern Ireland said Quinn, a border-based truck driver, was involved in the trafficking of illegal supplies of diesel fuel, a major part of South Armagh's thriving underground economy.

The detective spoke on condition of anonymity because he was not authorized to speak to journalists.

IRA figures dictate who can operate as fuel smugglers in the area and have previously forced out competition using violence or threats.