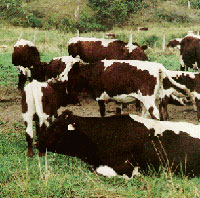 About 150 Romanian cattle farmers demanded higher subsidies on Monday, pouring milk on the ground and ringing bells that usually sound on funerals.

The country's agriculture minister, meanwhile, traveled to Brussels to try to persuade European Union officials that Romania would strengthen its oversight of EU payments to farmers.

Chairman of the Agrostar Federation trade union, Stefan Nicolae, who attended the Bucharest protest outside the Agriculture Ministry said Romanian cattle breeders were looking for an additional 300 lei (US$127, EUR89) per head of cattle for farmers who had up to three cows or bulls. He said that would apply to about 90 percent of farms in the country.

Nicolae said that 600,000 cattle were not officially registered, which could lead to some breeders not receiving subsidies.

Meanwhile, Agriculture Minister Dacian Ciolos was talking to European Union officials after the EU threatened this month to withhold EUR110.8 million (US$155.5 million) in farm handouts to Romania if it did not improve its oversight of the payments to its farmers.

EU officials gave Bucharest until November to improve controls and auditing of where the EU aid is spent - through the adoption of new computer software and by taking other steps - or risk a 25 percent cut in handouts next year. Romania joined the EU on Jan. 1.

The ministry has allocated 420 million lei (US$178 million, EUR124.58 million) next year in subsidies for all animal farmers, national news agency Rompres reported.

Some protesters played a funeral song on trumpets and others carried a wooden coffin with the word "animal farming" inscribed on the side. Others threw away milk. They said they would protest for the next two days and have threatened a large protest at the end of November if the government does not increase subsidies.