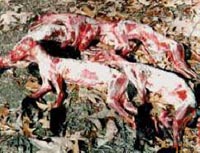 Thousands of minks were chased by authorities and residents on Monday in Denmark as some animal activists had freed them from a fur factory.

About 5,000 animals were freed from the farm near Asp, 320 kilometers (200 miles) northwest of Copenhagen, police said.

Investigators said animal rights activists were likely to blame, but no suspects had been identified.

"It is a reasonable assumption but we cannot say anything firm right now," police spokesman Knud Lauridsen said.

In the late 1990s and early 2000s, animal rights activists regularly freed minks from farms in Denmark, one of the world's largest producers of mink fur. Danish fur farmers raise more than 12 million animals every year.

Animal rights groups were suspected of releasing some 2,500 minks from a farm in Finland in August.