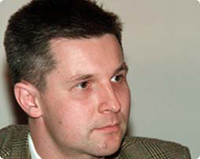 Two other Cabinet posts have been left vacant in the political turmoil that has gripped the nation.

Kalvitis has asked Parliament to fire Loskutovs because of an audit that revealed improprieties in the accounting of the anti-corruption bureau. Critics believe the move was politically motivated, because Loskutovs had been investigating alleged irregularities involving donations to Kalvitis' People's Party.

Kalvitis said Friday the four-party coalition government would stay together in order to see next year's budget and the Loskutovs issue through Parliament.

Latvia broke free from the Soviet Union in 1991. Kalvitis has been in power since December 2004.