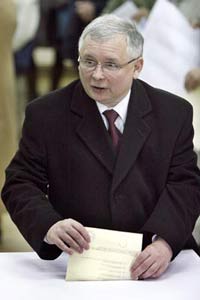 The Civic Platform party led by Donald Tusk led with 43.6 percent of the vote and 227 seats in the 460-seat Sejm lower house Sunday, according to exit polls for private TVN24. That was short of the 231 needed for a majority, but close enough to join with a smaller party to form a government.

Appearing before supporters late Sunday, Kaczynski conceded defeat, saying, "We didn't manage in the face of this unprecedented broad front of attacks," referring to the opposition's campaign. His Law and Justice party got 31.1 percent and 156 seats.

The result means Poland will no longer have twin brothers holding the two highest offices; Jaroslaw Kaczynski's brother, Lech Kaczynski, remains in office with a term lasting until 2010. The 58-year-olds are former child movie stars who as adults became activists with the Solidarity trade union movement that helped topple communism in 1989.

A hard-fought campaign generated turnout of 55.3 percent, higher than any parliamentary elections since the fall of communism, according to an exit survey conducted by the PBS DGA polling institute.

Both Tusk and Kaczynski favor good relations with the United States, but Tusk argues Poland has not gotten enough from its close ties with Washington and wants the country's 900-strong detachment in Iraq to come home. He also says Poland should drive a tough bargain in return for hosting a missile defense base.

It would be a stinging defeat for Kaczynski, whose socially conservative party was elected two years ago and has since been criticized for its assertive approach to the European Union and efforts to purge former communists from positions of influence.

Tusk, the favorite to become the next prime minister, said the election showed that Poles want to focus on the economic opportunities presented by the country's membership in the EU, which Poland joined in 2004.

"It is Civic Platform's intention to make Poles feel much better in their own country than they have felt so far," Tusk told cheering supporters. "We are going to do huge work and we will do it well. You have the right to rejoice today."

The government will not be formed until after coalition negotiations in the coming weeks.

Kaczynski had sought the elections two years ahead of schedule after his party could not overcome bickering with the two smaller parties it needed to form a majority. He has clashed with other EU countries over a new treaty to govern how the union makes decisions, demanding more say for Poland. He is also at odds with the EU over environmental protection, government support for Polish firms, and the death penalty, which he supports although Poland does not have it.

The country's deployment training Iraqi security forces has been extended through the end of the year by the current government, but Kaczynski has suggested it could be extended again. Tusk's party, on the other hand, wants the troops to come home, although some party officials have said that could take as long as until the end of 2008.

Tusk's party also calls for additional security guarantees for Poland such as the U.S. Patriot short-range anti-missile and anti-aircraft system, and suggests Kaczynski has failed to win rewards such as visa-free travel for Poles to the United States.

Both Kaczynski and Tusk began their political careers as anti-communist dissidents in the Solidarity movement, which paved the way for the fall of communism in 1989. Today, however, they part ways on how to deal with the ex-communists who were once their enemies.

Kaczynski favors a belated purge of ex-communists and their secret collaborators from public life - a reckoning purposely avoided in the peaceful transition of power. He maintains that the ex-communists continue to wield undue influence. But a court overturned his legislation to have up to 700,000 people, including journalists and teachers, screened for collaboration.

Tusk's party opposes that kind of reckoning, saying that Poland should not divert its attention from the new economic opportunities presented since the country joined the EU in 2004.