Prime Minister John Howard was beaten by Australia's opposition leader Kevin Rudd in a heated pre-election debate marred by by claims of censorship. 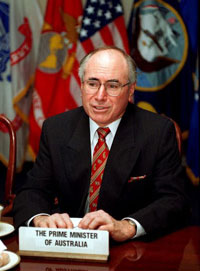 The bespectacled leader of the center-left Labor party Rudd pledged to look after working families. He always take action on climate change debate during 90 minutes that was watched by 10 percent of country's people.

Howard, who is seeking a fifth and final term, took credit for the Australia's record 17 years of economic growth, and promised further prosperity in the form of tax cuts and continued low unemployment.

The majority of Australia's newspapers awarded the debate victory to Rudd on Monday, running headlines such as "Rudd outpoints feisty PM" and "Rudd gets a wriggle on," referring to a controversial "worm" graph that monitored the favorable reactions of 90 undecided voters recruited by one television network.

Even many conservative commentators awarded the evening to Rudd, saying he had an inherent advantage as a challenger pointing out the flaws in an incumbent who has served more than 11 years as prime minister.

Rudd - a bookish, Chinese-speaking former diplomat 18 years Howard's junior - has held a commanding lead in opinion polls over the 68-year-old Howard, who has said he will retire even if he wins the election.

The so-called "worm," a line graph controlled by a studio audience that judges the performance of the debaters, gave Rudd a 65 percent approval rating compared to Howard's 29.5 percent. The rest were undecided.

The National Press Club, which organized the debate, cut Channel Nine's broadcast midway through the debate, forcing the network to source a backup feed from another network.

The press club said the Nine network had violated an agreement not to use the graphic, which had also been opposed by the prime minister.

Nine's Chief Executive John Westacott denied ever making the agreement, and called the press club's decision to cut their broadcast an "outrageous act of censorship."

Australian betters also backed Rudd, with the odds on a Labor party victory falling after the debate. According one betting firm, a dollar wagered for Labor fell returned A$1.60 on Monday, compared with A$1.70 before the debate.