Meeting between Putin and Israel's Olmert shrouded in mystery 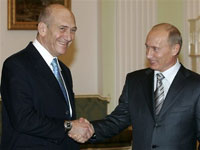 Meeting between Putin and Israel's Olmert shrouded in mystery

Hosting Olmert for a brief, abruptly announced visit, Putin promised to brief the Israeli leader on his trip to Iran last week - a big boost for a country whose president has called for Israel's demise. He also acknowledged his guest's dismay over Tehran's nuclear program, which Israel and the United States say is aimed at developing atomic weapons.

The meeting came amid mixed signals over the issue from Putin and Russian resistance to further U.N. sanctions against Iran over its refusal to halt uranium enrichment.

In the Kremlin talks, Olmert "expressed his opinion that effective sanctions by all the international community would have the potential to stop Iran pursuing the nuclear path," said Olmert's spokeswoman, Miri Eisin.

Iran's nuclear program was "the foremost issue," but Olmert also conveyed "Israel's concern over the Iranian and Syrian desire to acquire weapons from Russia of types that could change the balance in the area," Eisin said after the meeting, which lasted more than three hours.

The Kremlin released a brief statement saying that Putin and Olmert discussed Middle East peacemaking efforts and that Putin, at Olmert's request, told him "the main results of his recent visit to Tehran." It contained no details, and Kremlin officials could not immediately be reached for comment late Thursday.

"We know how concerned you are about the situation surrounding the Iranian (nuclear program)," said Putin, the first Kremlin leader to visit Iran since 1943, as he and Olmert sat down for talks. "I am ready to share the results of my visit."

Olmert expressed eagerness "to hear from you about the results of your trip to Iran and talk about other concerns."

Putin sought to assuage both Iran and the West during his trip, a delicate balancing act reflecting his reach for global influence and desire to preserve warm ties with a Middle Eastern ally without angering Washington.

By rejecting Iranian pressure to set a firm startup date for a nuclear power plant Russia is building in Iran, Putin signaled to the West that he is using Moscow's levers of influence to nudge Tehran toward cooperation with the international community's demands.

But he warned "outside forces" against attacking Iran, a boost toa country thathasfelt increasingly isolated and fearful of a U.S. attack. And amid meetings with leaders from France, Germany and the United States ahead of his trip, he sharply warned the West against pressuring Iran too hard and stressed that Russia sees no proof Tehran is seeking nuclear weapons.

That stance drew anger in Israel.

"Even if Putin says he is not convinced that Iran is developing a nuclear capability for military purposes, everyone knows what its real intentions are," Israeli President Shimon Peres said, according to a statement from his office. He said intelligence services have "incontrovertible proof ... that Iran is working to develop nuclear weapons."

The substance of Putin's meetings with Iranian President Mahmoud Ahmadinejad and its supreme leader, Ayatollah Ali Khamenei, was murky. Putin left the world wondering what kind of message he conveyed in private and how the Iranians responded.

U.S. President George W. Bush said Wednesday he wanted a report directly from Putin about his visit to Iran - and to know whether Putin "continues to harbor the same concerns" as Bush about Iran's nuclear program. Bush suggested that a nuclear-armed Iran could trigger World War III.

Russia's mantra is that the standoff over Iran's nuclear program can only be solved through diplomacy. By hosting Olmert days after meeting with Iranian leaders, Putin may have been casting himself as an irreplaceable bridge between Iran and its fiercest critics.

"The whole world is very suspicious about Iran's nuclear program," said Meir Javedanfar, a Tehran-born Middle East analyst. "He spoke to Ahmadinejad. Now he's speaking to Olmert. He will be in a position to act as a go-between."

Russia has used its clout as a veto-wielding U.N. Security Council member to water down two sets of sanctions against Tehran over its refusal to halt uranium enrichment, which can lead to development of weapons. Moscow has since resisted a U.S. push for additional sanctions.

Eisin did not give details about Israel's concerns about the acquisition by Iran and Syria of Russian weapons.

The Israeli newspaper Yediot Ahronot reported that Russia plans to provide Syria with surface-to-air missiles and anti-aircraft missiles it has never before sold to another country.

Russia disputes Israeli claims that Russian arms sold to Syria have been used by Hezbollah guerrillas in Lebanon. Moscow insists its weapons deals with Syria and Iran have complied with international law and have not disrupted the balance of power in the region.