Beijing vice mayor: boycott of Olympics to be `inappropriate and unpopular' 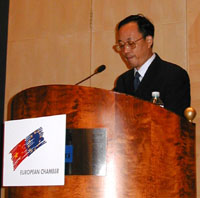 Beijing vice mayor: boycott of Olympics to be `inappropriate and unpopular'

The vice major of Beijing said Friday that attempts to connect China's role in Myanmar with a boycott of next summer's Olympics would be "inappropriate and unpopular."

"I believe that any political issue or issues that have nothing to do with the Olympics should not be linked with the Olympic games," Liu Jingmin, who is also a vice president of the Beijing organizing committee, said in a briefing on preparations for the Olympics, which are just under 10 months away.

China's communist government has been criticized for its ties with governments in Sudan and Myanmar, and calls from boycotts have stemmed from business China does with both countries.

"The Chinese government has played a constructive and responsible part in the Myanmar issue," Liu said. "The constructive role by China has been recognized by all. I think the attempt to use this issue as an excuse to boycott the Beijing Olympics is both inappropriate and unpopular."

The recent violence in Myanmar increased calls for China to push its southern neighbor more toward change.

A boycott would be embarrassing to China, but there seems to be little appetite for it with world leaders resistant to the idea.

Liu also said human rights conditions were improving in China as a result of the Olympics. In bidding for the games, Chinese officials said having the games would speed change.

"Indeed I believe that preparations for the Olympics have tremendously boosted the development of human rights in China," Liu said, citing improved living standards and moves to clean up the environment.

"All the preparations for the games will accompany the process of further development in China," he said. "Democracy and human rights in China will also receive a big boost as a result of these preparations."

"We are 100 percent sure that we can demonstrate to the world that the 2008 Games in Beijing will be games of safety and security," he said in a wide-ranging, 90-minute news conference.

Liu said a "high-level command and control system" was being set up and he called the planning "thoughtful and meticulous."

"We have carefully analyzed every incident that has occurred in the history of the Olympic games and then we formulated a strategic plan."

He said fans attending major events would be identified by electronic chips in tickets.

Liu said the operating budget for the Olympics had risen by at least 25 percent from the first budget of US$1.6 billion (EUR1.12 billion), which was submitted during the bid process in 2001. He said the budget had risen to "more than US$2 billion (EUR1.4 billion)" but said it was still below the US$2.4 billion (EUR1.68 billion) budget for Athens 2004.

He said the increase was due largely to more spending on security and the rising value of the Chinese currency against its American counterpart.

Liu said construction on 27 of the 37 venues had been completed, with nine more set to be finished by the end of the year.

The exception is the National Stadium - the Bird's Nest - which will be ready in March. The Media Village and Olympic Village will also be completed next year, Liu said.