At least five officers will be fired for an incident in which nuclear-armed missiles were mistakenly loaded on a B-52 bomber and flown across the U.S. 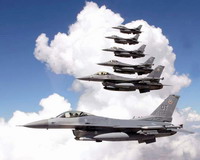 Defense Secretary Robert Gates and Chairman of the Joint Chiefs of Staff Adm. Mike Mullen are to be briefed Friday on the disciplinary plan and other results of an Air Force probe into the incident.

Gates said Thursday that officials want to reduce the chances of another such incident "to the lowest level humanly possible." But it "would be silly" to promise it won't happen again, he said at a press conference with Mullen.

Asked if they could assure the American public the U.S. nuclear stockpile is secure, Mullen said he wanted to see the report first.

"I look forward to understanding ... what happened here ... to really make a judgment about where we are and what we have to do," he said. "But certainly being at a point where we can assure everybody that we have control of these weapons ... is where we absolutely have to be."

Neither man commented on the pending disciplinary action.

Two Defense Department officials said earlier Thursday that the Air Force investigation found long-established procedures for handling the munitions were not followed and one of the officials said it recommends that five or more officers be relieved of their duties.

They spoke on condition of anonymity because they were not authorized to speak on the record. They also said senior Air Force officials were still reviewing parts of the report, though it was unclear whether any changes were planned.

The Air Force said last month that one munitions squadron commander was fired shortly after the Aug. 30 flight in question and that ground crews and others involved had been temporarily decertified for handling weapons.

The officials declined to say what procedures were not followed. But the mishandling in August would have required not one mistake, but a series of lapses by a number of people in order for armed weapons - as opposed to unarmed ones - to be inadvertently taken out of a storage bunker, mounted on the B-52, misidentified on a flight manifest and flown across the U.S. for three hours without anyone noticing.

The plane also sat on a runway for hours with the missiles after arriving in Louisiana before the breach was known - meaning a total of 36 hours passed before the missiles were properly secured, officials have said.

The Air Combat Command ordered a command-wide stand-down - instituted base by base and completed Sept. 14 - to set aside time for personnel to review procedures, officials said.

The incident was so serious that it required President George W. Bush and Gates to be quickly informed.

The Air Force said there was never any danger to the public because the weapons were designed with multiple safety features that ensure the warheads do not detonate accidentally.

But officials also have asserted over the years that such a mistake could not happen because there were numerous procedures in place to ensure the safe handling of nuclear weapons.

An Air Force spokesman, Lt. Col. Edward Thomas, declined to confirm Thursday morning what punishments were planned or to give any details of the probe's findings, saying Gates had not gotten the full report and those to be disciplined were not to be notified until later Thursday.

Three other defense officials said the Air Force planned to announce its investigation results and the punishments at a Pentagon press conference Friday. But two of them said that could be delayed if, for instance, Gates wants further information after he is briefed or more senior officials in the Air Force, who were still discussing the report, disagree with the decision.

The anticipated disciplinary actions would be the most severe ever brought in the Air Force in connection with the handling of nuclear weapons, The Washington Post said in Thursday editions, quoting an unidentified official who said that was aimed at sending a message about accountability.

The weapons involved were the Advanced Cruise Missile, a "stealth" weapon developed in the 1980s with the ability to evade detection by Soviet radars. The Air Force said in March that it had decided to retire the Advanced Cruise Missile fleet soon, and they said after the breach that the missiles were being flown to Barksdale for decommissioning but were supposed to be unarmed ones.

Three weeks into the Air Force investigation, Gates also asked for an outside inquiry to determine whether the incident indicates a larger security problem on the transfer of weapons. Official said his request for the inquiry, which is still under way, did not reflect any dissatisfaction with how the Air Force was conducting its investigation.

White House press secretary Dana Perino said Thursday that Bush "appreciates the fact that Secretary Gates (had moved quickly) to find out what went wrong, make sure it doesn't happen again, and hold people to account if anyone did something wrong."