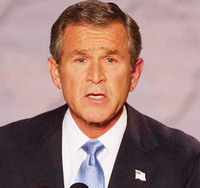 Democrats are sure to use the vote as a campaign issue in the 2008 congressional and presidential elections, casting Republicans as denying health care to children at a time the Bush administration is spending billions of dollars on the Iraq war.

For many Republicans, though, it was an opportunity to shore up support from fiscal conservatives, who have complained that the administration has been too free-spending on social programs.

But 44 Republicans broke ranks with Bush. Still, Democrats, who hold a slight majority, could not muster the two-thirds vote needed to override Bush's veto, falling 13 votes short in the House of Representatives. The final tally was 273-156.

The State Children's Health Insurance Program, known as SCHIP, now subsidizes health care insurance coverage for about 6 million children at a cost of about $5 billion (3.5 billion EUR) a year. The vetoed bill would have added 4 million more children, most of them from low-income families, to the program at an added cost of $7 billion (4.9 billion EUR) annually.

To pay for the increase, the bill would have almost tripled the federal tax on cigarettes, to $1.00 (.70 EUR) a pack.

"This is not about an issue. It's about a value," the top leader in the House, Democrat Nancy Pelosi, said just before the vote. "For the cost of less than 40 days in Iraq , we can provide SCHIP coverage for 10 million children for one year."

Republican opponents said the bill would encourage too many middle-income families to substitute government-subsidized insurance for their private insurance. The bill gives states financial incentives to cover families with incomes up to three times the federal poverty level - $61,950 (43,324 EUR) for a family of four.