Bolivian police took control of the country's most important airport after airport workers detained an American Airlines plane on the runway, demanding the carrier pay them landing fees in cash. 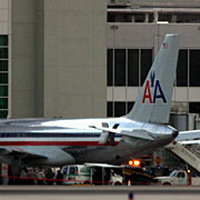 About 220 Air force troops and military police stormed the Viru Viru airport in the city of Santa Cruz before dawn. One soldier was wounded by gunfire and another was treated for cuts from either a knife or broken glass, officials said.

Police used tear gas against some workers trying to enter the terminal and later set up checkpoints at roads leading to airport.

Viru Viru "will remain militarized until the government is certain there will be no more disturbances," Javier Garcia, the head of civil aviation, told reporters.

The communications office of the private company that runs the airport, Sabsa, said flights in and out of the airport were running normally Thursday.

The government took over the airport after workers on Tuesday detained an American Airlines plane as it was set to take off for Miami with 140 passengers aboard. Another plane belonging to Aerolineas Argentinas was also detained.

The workers were demanding the airline pay landing fees of up to US$2,000 (1,400 EUR) in cash locally, rather than deposit the fees with the federal airport authority.

"We don't like using force, but we were forced to use it," Public Works Minister Jose Quinn told The Associated Press.

The airport conflict has broader political implications because Santa Cruz, a relatively wealthy city in eastern Bolivia , has chafed under the government of leftist President Evo Morales as it moves to nationalize industries and redistribute land and wealth to the country's poor majority.

On Wednesday, American, a unit of Dallas-based AMR Corp., and Brazil 's Gol Linhas Aereas Inteligentes SA temporarily suspended service to Bolivia due to the conflict at Viru Viru.

Quinn said the government was calling on Viru Viru workers, who number about 100, to return to their jobs. But, he said, the airport will be run by the federal government for about 90 days while the local airport agency is audited.