Despite protests from environmental groups and two South Pacific governments an aquatic park in the United Arab Emirates will receive 28 dolphins. A shipment of bottlenose dolphins will come from Solomon Islands. 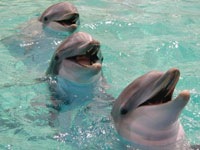 As the mammals were being loaded, three dead dolphins were located near the firm's holding pens outside the Solomons' capital, Honiara.

The 28 dolphins from the Solomons were due at the Atlantis Resort Hotel on Palm Jumeirah - a manmade Persian Gulf island shaped like a palm tree off Dubai, the country's Gulf News paper reported Thursday.

Leni said that his country has never broken any laws while exporting dolphins, and that animal rights activists' arguments, based on the Convention on International Trade in Endangered Species (CITES), were completely baseless.

"Nobody, especially the hopeless NGOs (nongovernment organizations), has told us what laws we have broken to allow the export of dolphins," he told The Associated Press.

Both Australia and New Zealand voiced opposition to the shipment.

Australian Environment Minister Malcolm Turnbull said his government did not support any commercial export of dolphins.

New Zealand Conservation Minister Chris Carter said he was gravely concerned over the resumption of live dolphin exports in a letter to Solomons counterpart Mark Kemakeza.

Solomon Islands banned the live dolphin export trade in 2003 following an outcry over a consignment of 28 bottlenose dolphins to an aquatic park in Mexico. Activists claim at least nine of the dolphins died in Mexico.

Satu, who was involved in the exports to Mexico, claimed the ban was illegal and last December won a landmark court ruling that paved the way for dolphin exports to resume.

After the court ruling, the government quickly changed its position on the trade.

Four years into construction, the palm-shaped island and Dubai's coast development project - led by Dubai government-owned Nakheel - has been repeatedly criticized by environmental agencies from across the globe.

The manmade islands have not only changed the shape of the United Arab Emirates and re-contoured the coast of the oil-rich state, but also altered sea currents, endangered corals and marred the once-unbroken sea view from Dubai's natural beach.