James Watson, an American scientist who got the Nobel Prize for co-discovering the DNA molecular structure, announced that tests have shown that Africans are not as intelligent as whites. The discovery caused a real turmoil in Britain. 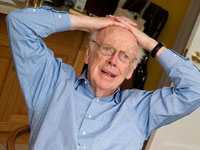 A government minister, scientists and a human rights activist condemned James Watson's comments as racist, and London's Science Museum canceled his speech, which had been scheduled for Friday.

Watson's interview in The Sunday Times Magazine also set off a furious debate in the British media, from the British Broadcasting Corp. to the front pages of other papers.

In its profile of Watson, The Sunday Times Magazine quoted him as saying he is "inherently gloomy about the prospect of Africa" because "all our social policies are based on the fact that their intelligence is the same as ours _ whereas all the testing says not really."

Watson, who arrived in Britain on Thursday to promote his new book, "Avoid Boring People: Lessons From a Life in Science," was not immediately available for comment.

Watson, 79, is a molecular biologist who serves as chancellor of the Cold Spring Harbor Laboratory in New York, a world leader in research into cancer and neurological diseases. The laboratory issued a statement saying its board of trustees vehemently disagreed with his remarks and that they were "bewildered and saddened if he indeed made such comments."

The author of several books, Watson has been well-known in Britain since his days at Cambridge University in the 1950s and 1960s on the trail of DNA's molecular structure. Watson, Francis Crick and Maurice Wilkins won the 1962 Nobel Prize for their work on the subject.

In the Times magazine interview, Watson was quoted as saying he opposes discrimination and believes that "there are many people of color who are very talented." But he also was quoted as saying that while he hopes that everyone is equal, "people who have to deal with black employees find this not true."

David Lammy, the government's skills minister, said Thursday that Watson's remarks were "deeply offensive" and would "succeed only in providing oxygen" for the British National Party, a small, far-right political party that has been accused of being racist.

"It is a shame that a man with a record of scientific distinction should see his work overshadowed by his own irrational prejudices," Lammy said. "It is no surprise to me that the scientific community has condemned this outburst, and I think people will recognize these comments for what they are."

"We call on Dr. Watson to lodge an unreserved apology to Africa and all people of African origin for his disrespectful remarks," Adomdza said.

Watson was due to speak at London's Science Museum on Friday, but directors called off the event.

"We know that eminent scientists can sometimes say things that cause controversy and the Science Museum does not shy away from debating controversial topics," a museum spokesman said, speaking on condition of anonymity in line with the organization's policy.

However, Watson's comments "have gone beyond the point of acceptable debate and we are as a result canceling his talk at the museum."

The author's first of several schedule speaking dates in the UK had sold out in the museum's 400-seat the Imax cinema.

Watson also has courted controversy in the past, reportedly saying that a woman should have the right to abort her unborn child if tests could determine it would be homosexual.

He also suggested a link between skin color and sex drive, proposing a theory that black people have higher libidos.