Republican Sam Brownback being an outsider will drop out of the 2008 campaign on Friday. 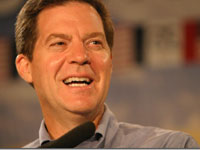 Brownback, a senator from Kansas, had trouble raising money to compete in the race. He is expected announce his withdrawal in Topeka, Kansas.

"I know Senator Brownback enjoyed campaigning and meeting new people in talking about ideas for the future of America, but I think it came down to money," said one person close to Brownback, who requested anonymity because the candidate had not yet announced his plans.

Brownback, who is in his second term, had said in his first Senate campaign he would serve no more than two terms in Senate. He is widely expected to seek the Kansas governor's office in 2010.