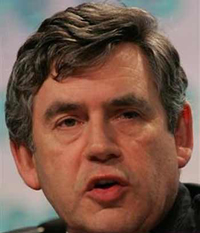 As Japan’s Parliament is expected not to secure an extension of its Afghan mission, the U.S. and Britain urged Thursday the Asian nation to keep on with their mission in the Indian Ocean .

Japanese officials have acknowledged that a bill to extend the mission is unlikely to gain approval by Japan's divided parliament, or Diet, before the Nov. 1 deadline - and that a gap in Japan's activities is inevitable.

"We would hope that the mission can be continuously undertaken," U.S. Ambassador to Japan Thomas Schieffer told reporters Thursday after meeting with Japanese Foreign Minister Masahiko Komura.

"I told (Komura) that we stood ready to do anything we could to provide information that would allow the Diet to deliberate the issue and to hopefully come to a good conclusion," Schieffer said.

Also Thursday, British Prime Minister Gordon Brown urged Japan to renew its refueling mission during a phone call with his Japanese counterpart, Yasuo Fukuda, according to a Foreign Ministry statement.

"I told him that I will do my utmost," Fukuda later told reporters.

Japan's parliament is in gridlock over a new anti-terrorism bill that would extend the refueling mission in the Indian Ocean for a year. Tokyo dispatched it ships to the region in 2001 under an old bill that has been extended three times but runs out on Nov. 1.

A new law submitted Wednesday by the ruling coalition limits the scope of Japan's activities in the region, in hopes of mollifying a resurgent opposition here that argues the mission involves Tokyo too deeply in military operations in Iraq and Afghanistan.

The bill would limit Japanese ships to refueling and supplying water to ships on anti-terrorism patrols, but does not allow them to refuel vessels involved in military operations, such as attacks.

But opposition bloc has refused to cooperate, threatening to reject the bill in parliament's upper house, which the bloc controls.

The ruling coalition, which holds the lower chamber, can ultimately overrule an upper house rejection. Parliamentary proceedings are expected to spill into November, however.