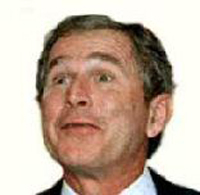 America is criticizing Iran to whitewash its own failure in Iraq, the Muslim country said in response on warning by U.S. President George W. Bush that its nuclear activities could lead to World War III

"The expression by the U.S. president will eventually cause international insecurity. This sort of policy will jeopardize peace and security at the international level, and is a barrier for peace," the Iranian Foreign Ministry spokesman, Mohammad Ali Hosseini, said in a statement.

Hosseini said the U.S. president was resorting to "warlike rhetoric" to divert the American public's attention from White House failures on international issues such as Iraq and Afghanistan.

On Wednesday, President Bush warned that a nuclear Iran could ignite a world war.

"I've told people that if you're interested in avoiding World War III, it seems like you ought to be interested in preventing them (Iran) from having the knowledge necessary to make a nuclear weapon," Bush said.

Tensions are high between Iran and the U.S. over Washington's allegations that Tehran is secretly trying to develop nuclear bombs and supplying Shiite militias in Iraq with deadly weapons that kill U.S. troops. Iran denies both claims.

Iran and the U.S cut off diplomatic relations in 1979 after Iranian militant students seized the U.S. Embassy and took 52 Americans hostage for 444 days during the country's Islamic Revolution.